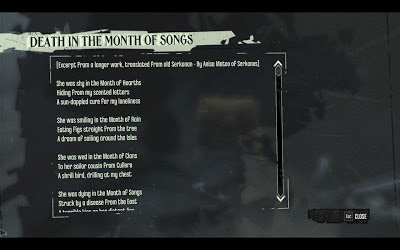 Like Mark of the Ninja, 2012’s Dishonored is an action-stealth game and a shining example of that genre. It’s also credited with introducing gamers to one of the most memorable fantasy worlds of recent times: the plague-ravaged fishing city of Dunwall, a kind of steampunk Victorian East London powered by whalefat batteries (the whales are implied to be Godzillarish mutants with connections to another dimension). Automatic gun turrets and electric ‘walls of light’ exist alongside flintlock pistols and duelling sabres, as the protagonist, Corvo, traverses titanic iron bridges and vast stone fortresses to revenge himself against the corrupt ruling classes.

Taking a design cue from Bioshock, also set in a city gone wrong, the lore of the world is revealed to the player mostly through notes and books he or she finds scattered about the place, often near decaying corpses. Reading them is entirely optional and has little bearing on the plot; they’re there to add flavour to the world, to make it feel inhabited by more than the main characters and a legion of disposable guardsmen. And wouldn’t you know it: out of all the various material I found, two were definitely poems.

The first, found in the second level of the game near a homeless plague victim, is the stronger of the two. It’s called ‘Death in the Month of Songs’, with a notation explaining that it’s both an excerpt from longer work and a translation (from ‘old Serkonan’, if you were wondering). This is a clever move by the writer, as it provides an explanation for the poem lacking the sense of an ending, and also excuses a little of the tinniness, since translations tend to be difficult beasts. That said, it does read like an honest attempt at a decent poem. It consists of four stanzas of three lines, with an implied narrative and use of repetition in the first lines of each: “She was shy in the Month of Hearths” through to “She was dying in the Month of Songs”. It apes the style of the romantics somewhat, and has the odd moment of interesting imagery:

She was wed in the Month of Clans
To her sailor cousin from Cullero
A shrill bird, drilling at my chest

The last line, though, is pretty poor: “A terrible kiss on her distant lips”. ‘Terrible kiss’ has that try-hard vibe about it, and the internal rhyme is heavy-handed. She’s dying from a disease at this point, but why are her lips distant? Distant, perhaps, from the narrator, who is her suitor but who ultimately loses her to the cousin. In fact, I have to hand it to the poem: it does manage to tell a tragic story with very few words. The lady in question marries a sailor instead of the narrator, who loves her, because she has a head for adventure. A cruelly short time later, she dies from a tropical illness.

The second poem is depressingly bad. It purports to be an excerpt from ‘a set of cautionary tales for children’ and is obviously intended as a sort of macabre nursery rhyme or folk ballad: 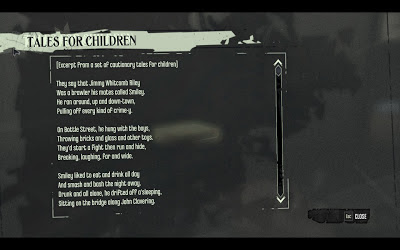 Here’s the thing about rhymes and ballads though: they tend to scan. The rhythm is such that the lines roll off the tongue. Here we start with:

They say that Jimmy Whitcomb Riley
Was a brawler his mates called Smiley.
He ran around, up and down-town,
Pulling off every kind of crime-y.

Which is all kinds of awkward. And what’s the point of forcing a rhyme with the ending ‘y’ if it’s not even a full rhyme? Two stanzas later, we get ‘a-sleeping’ rhymed with ‘Clavering’. This is as lazy as it gets. On top of that, the rhyming pattern established in the first stanza, which is basically a variation on a limerick, is abandoned in the second through to fourth, presumably because it was too difficult to find more than one rhyme for ‘boys’ or ‘day’.

But the worst thing about this effort is that there’s no real story. If you’re going to half-arse the poetry for the sake of telling a ‘cautionary tale’, you should at least have a tale in mind. This one starts off describing a typical no-good character. Then, in stanza four, he wakes up as a fish! That’s it! Even McGonagall had something he actually wanted to tell us about.

Someone on the Dishonored writing team obviously decided that inserting poetry into the game through these books and documents would help give the world credibility. It’s one of those little details that makes an imaginary people seem real. Indeed, ever since Tolkien, it seems to be an unwritten rule that every fantasy world must have its ballads, tavern songs and poems as a sign of the richness of its culture. This makes sense. But it also leaves you wondering: why, then, don’t games developers hire a poet to write them their poems? Poets tend to come very cheap, and many would embrace the challenge of writing in whatever style you wanted.

I suppose the answer is that for all that the ‘idea’ of poetry still holds sway, the average person’s familiarity with it is so lacking that they can mistake an awful, rushed attempt for a convincing approximation.