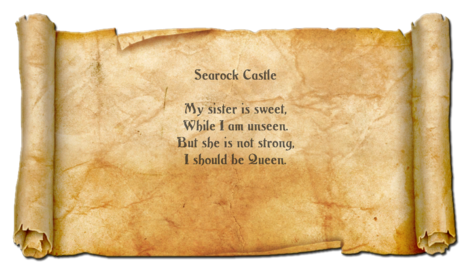 Trine 2 is a delightful co-op puzzle platformer which will burn out your PC’s heart with its gorgeousness. The plot makes a little more sense in single-player (the Trine itself is a device used to explain why the player can switch between three characters) but it comes into its own when played with two friends. The Knight holds off the goblins with sword and shield while the Wizard alchemises an unstable bridge out of thin air and the Thief lights the way with flaming arrows. Something like that.

The poems in Trine 2 are written on secret scrolls hidden in various places throughout the span of the game, much like in Mark of the Ninja. And like in Mark of the Ninja, they form a complete narrative when pieced together, gradually revealing the history of the game’s antagonist. Because it’s set in a fantasy land ablaze with colour and sunlight, however, the narration is somewhat more direct, the style of telling sharply reminiscent of children’s fairy tales. The first ten are all simple quatrains with an ABCB rhyme-scheme. Cleverly, they use repetition to telegraph the conceit of alternating narrators: two sisters taking it in turn to speak about their relationship, each with a different outlook. There’s little in the way of subtle metaphor, but that’s fine – they fulfil their intended purpose of innocently leading the reader down an ever-darkening path.

The writer’s grasp of meter does slip a little, unfortunately, as in the last two lines of the sixth piece:

My sister is silly,
Insipid and dim.
Yet everyone still loves
This golden girl prim.

It’s another case, I feel, where even waving it under the nose of a poet would have resulted in a superior edit.

The last two poems in the game are longer. The sisters are finally named and Isabel gets a song, Rosabel a lament. ‘Isabel’s Song’ is the better piece: 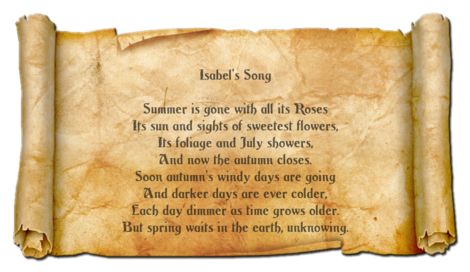 The ABBA rhyme-scheme is refreshing in this context, and there’s just enough variation in the rhythm for this to feel like a ‘song of innocence’ in the style of Blake, even if it’s rather clichéd. The fourth line being one less metrical foot long is surprisingly effective. If it only it were repeated in the eighth!

‘Rosabel’s Lament’ is hamstrung by at least two absolutely clattering lines: “And grief and pain are my hopes” and “My failures ever let me mourn”. “Failures, may I mourn?” “Yes, you ever may!” “Oh thanx.” Maybe there’s something deliberate in the way the sinister nursery rhyme has segued into bad teen angst poetry as the sisters have grown up.

You can read all the poems here, although in this case in particular, I would recommend discovering them through playing the game. More so than in the two previous examples in this series, I would say the effect of the poems is enhanced by their gradual accumulation while the ‘present day’ plot unfolds. It’s a very effective form of narrative parallelism that feels less forced than threading flashback sequences through a story, as is often done in television drama. The fact that the saga of the sisters is told through poetry is an important factor; their story at once has the chime of legend and the tangibility of a recovered artefact, since it’s presented on weathered parchment. It leaves the reader in a position where they can make their own mind up about its significance.