written by the Judge 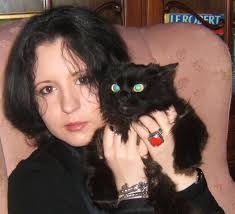 Writing about poetry, it’s pretty hard to get travel expenses covered. Obviously it doesn’t help when the poet you’d like to meet lives not in another city but in another country, and seen how I’m job-hunting at the time of writing this, my appreciation of Linda Maria Baros will have to be written from home, sitting in my flat in Shadwell, with a glass of Coke fizzing next to me.
That I should have opened the article with such a perambulatory reflection reveals, I think, that I am somewhat troubled in introducing this week’s poet. Maybe I should start with the kind of stuff you can find out just by Googling her. To be sure, then, Baros is a Romanian-born, Paris-based poet writing in French, thirty-one years old, currently one of the most successful (and discussed) young voices to have attained prominence in the competitive French scene. Her mixed cultural background may sound exotic upon first impact, but it is not at all unusual, especially not in the present age, and not in Europe – she is, in fact, a typical example of a translocal poet.
What makes her tough to figure out is her poetry. Baros has no qualms in representing extreme social deprivation, painting vignettes about homeless people or prostitutes (from this point of view, I suspect her experience in Bucharest may have come to bear on her writing more than her years in Paris). She also does not refrain from using visceral, disturbing imagery which could be taken straight from a splatter movie; titles like ‘The high-schoolers rip birds out of their rectum’ or ‘If the lintel beheads you, that’s a bad sign’ should begin to give an idea.
Unpalatable as the imagery may be, it is executed with superb technical confidence, and one understands why she is already famous at a relatively tender age. In ‘The children that passed through the sifter’, my favourite of the poems I’ve read by her, she writes a long monologue addressed to an unnamed second person. ‘It is for you,’ she writes, ‘that I have split my heart in two, / like a lamb’s hoof’. She goes on to list the many things she did ‘for you’ in a sequence of images that are as suggestive as they are bleak:
I stole and lied, I spat blood.
I washed dead bodies
and I slept on plastic bags
filled with waste from the garbage skips
in streets that always have
a knife at hand I slept,
amid the shells of the city’s old beggars
who, in your honour, have let their beards
grow to the ankles,
like the ancient Sumerians
off to hunt lions for their loved ones.
The closing lines bring us back to the trope of the heart with a simile that is nothing short of extraordinary:
Yes, it is for you that I have forcefully come into this world
like a wave of blood
that no longer finds its path to the heart.
The source expression is actually subtler than I am able to translate – the original for ‘forcefully come into’ is ‘entrée en force’, which has a formal, professional sense I could not retain in English (it is what you say for instance of a contract as it becomes formally effective – the date of the ‘entrée en force’ is…). But of course it also sounds like ‘entering forcefully’, which in context has connotations of birth and rape simultaneously. The image, and indeed the entire triplet as it works towards the super-charged trope of the ‘heart’, is powerful and deeply layered.
So why do I say that Baros is ‘tough to figure out’? Well, it is only that I do not understand where all of this horror comes from. As far as I can tell from the bio snippets that I could find on the net, she is an academic poet of the type that we so commonly find in France, with a PhD and a great deal of work in the field of translation. Even if we take her imagery to be a form of engagement with the realities of social deprivation (an agenda we would commend), it is so gritty and deliberately shocking, so uncompromisingly violent, that one feels there is more at work than simply denunciation. Where is all this gore pouring out from?
And that’s why I wish Jon and Kirsten could cover my flights (business class if you’re reading, fellas). Baros is a very interesting poet, but I have the impression I’m not getting the full story, and I might not be able to until I can meet her in person. In the meantime, those of you who can, and who are not too squeamish to enjoy this type of verse, definitely check her out. Salt has done me the favour of providing some translations, so you can do that even without speaking French. I promise you, she leaves a scar.