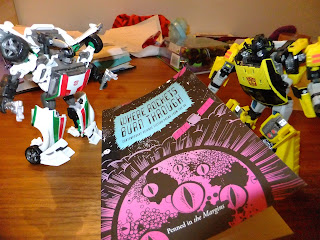 If you’re stuck for a gift for the sci-fi fan in your life, and a slogan t-shirt isn’t going to cut it, Penned in the Margins might just have the answer.

New anthology, Where Rockets Burn Through: contemporary science fiction poems from the UK, is not only beautifully designed (Sunstreaker and Wheeljack seem to think so, anyway) but also makes for a laser-firing, catsuit-sporting blast-off of a poetry mission.

Jon and I pop up a few times inside (he re-jigs Catullus into space opera while I salivate over the precious meal from Soylent Green), alongside some seriously spark-spitting other writers.

Gifting poems to those who are usually more fond of box sets than tercets may seem like a risky gambit, but editor Russell Jones has picked a rich range of moreish work that, while intriguing and substantial, won’t alienate (apologies for that one) anyone coming to poetry afresh. Poetry has a knack of providing an off-kilter, probing new look at classic tropes and well-loved stories, and this is a real genre-zapper.

Where Rockets Burn Through: contemporary science fiction poems from the UK is normally £9.99 plus p&p, but until 21 December, Penned are offering 20% off,so you can snaffle it for £7.99 plus postage.