Firstly, Sidekick Books has been nominated for THREE Sabotage awards! We’re up for (drumroll):

​
and Best Anthology (Follow the Trail of Moths: the best of Wayne Holloway-Smith’s salons)

​
So if you like what we do, please remember we need your vote to win! No registration gubbins needed. It’ll take less than a minute (or more if you’d like to elaborate on why you dig our strange creations). The Sabotage Awards are a big deal for small presses, so thank you in advance for casting your ballots!
Vote here!
Secondly, if you’re in London this week, get thee to Waterstones Hampstead this Tuesday 13th May at 7pm for some Angela Lansbury lovin’, featuring Twin Peaks, murder and     shunds. If you missed the launch, or simply need your Jessica hit, join Chrissy Williams as she takes us deep into the world of ‘Angela’…

​
The King’s Cross launch event last year was packed, so this is a great opportunity to see one of London’s wittiest, warmest and most innovative poets share her darker Cabot Cove obsessions.
Tickets: £5
Facebook event here.
Buy the book here, with free Angela pin badge!
Thirdly, please wish a warm welcome to Mitchell the Cat, who has moved from a prominent position with lots of responsibility at Battersea Cats and Dogs Home to our Silvester Road HQ, and is currently on photocopying duties.

​
Have a fantastic Eurovision, everyone! Let’s wish Conchita Wurst all the best! 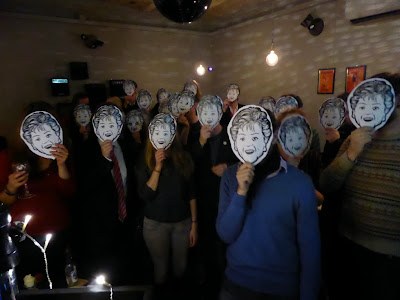 So the 16th October was the actress Angela Lansbury‘s 88th birthday, and the day we launched Chrissy Williams‘ and Howard Hardiman‘s Angela into the world. The party was at Drink, Shop & Do near King’s Cross. There was cake, games, much donning of Angela masks, and your correspondent sampled a Smouldering Cherry cocktail in celebration of the book’s debt to Twin Peaks.

If you weren’t there and you haven’t picked up a copy yet, Angela is in part a poetic and visual tribute to Lansbury, in particular her role as Jessica Fletcher in Murder She Wrote, but also a Lynchean descent into the otherworldly realm between our world and the world of detective fiction. It’s very dark and very funny, and lovingly illustrated in the starkest of colours. It also might freak you the hell out, so we’d recommend reading in daylight, among friends. 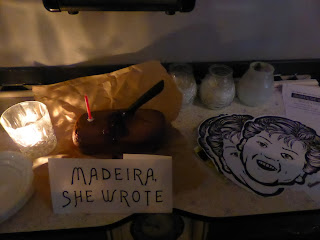 Chrissy Williams has also just been shortlisted for a Michael Marks Award for her previous pamphlet, Flying Into the Bear, and she has several typically unique poems in our just-around-the-corner mega-anthology Coin Opera 2: Fulminare’s Revenge. In fact, since we finished putting that book together, the various contributors can’t seem to stop winning prizes and getting put onto shortlists. That’s a good sign, eh?

And yes, that is a madeira cake above with a knife stuck into it, bleeding copious amounts of jam. That’s the kind of party we throw. 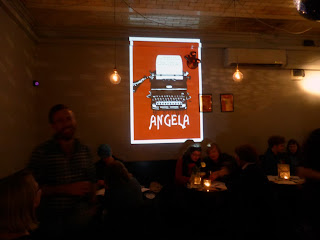