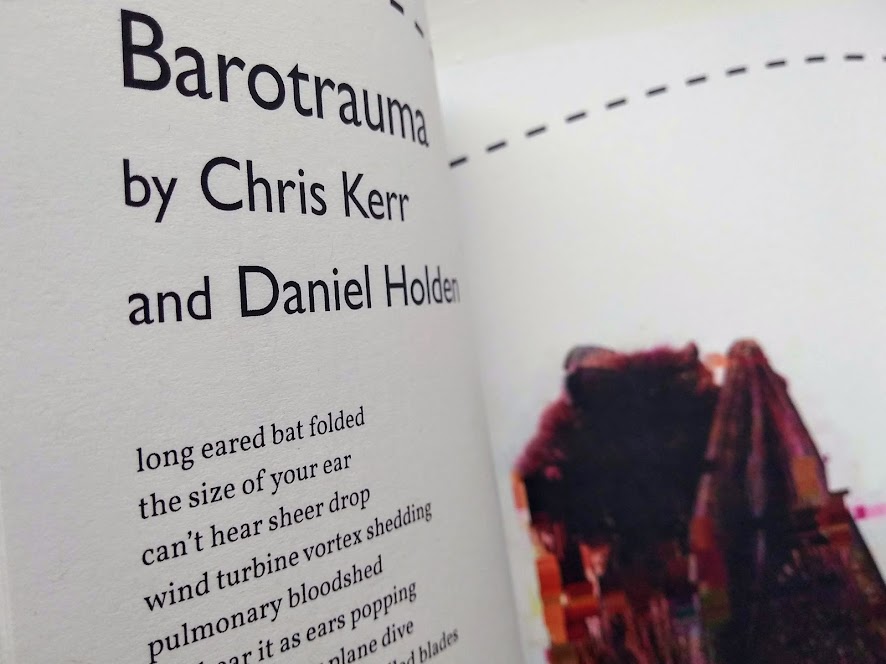 ‘Barotrauma’ describes tissue damage resulting from changes in air and water pressure, typically rupturing the lungs or ears. It is a notable cause of death among bat populations due to them flying close to wind turbines, and Chris Kerr and Daniel Holden reach deep into the physicality of such a violent end for this short interactive sequence. It begins with a stuttering, choppy poem that documents the death in close-up, then digs into a three-way visual metaphor – corrupted data as broken body, but also as haywire psychogenetic programming. What happens when technology outpaces the evolutionary development of organic species? We misfire. We struggle to evade suffering.

The code poem at the heart of the sequence begins with a pun: ‘.bat’ is the file extension of a Windows batch file, and the poem is written in this style of scripting. Like all code poems, it plays on the tension between language as information and language as visual architecture, but here that tension has an additional significance – the code executes the animal it embodies. In living, it dies. The fleshy pinks and purples of the text against a black background are a subtle echo of the bat’s physical form, and the asemic cascade of punctuation produced by running the file resembles the fading pulses of a brain.

The final part of the sequence tasks the reader with defining the functionality of various command prompts to help the bat avoid this fate – in other words, a kind of beginner neurosurgery. How would you edit the mind of an animal – or a person – to enable it to better survive?

This sequence is part of Battalion, a compendium of meditations on bats and human—bat relations. Contributors will be reading from the book and inviting audience participation at a special event on 12th December at the Walthamstow Wetlands Centre, as part of their Wetlands Lates series. Tickets can be booked here.

Chris Kerr and Daniel Holden have previously collaborated on a collection of 12 code poems, published online and in print. These can be seen here.